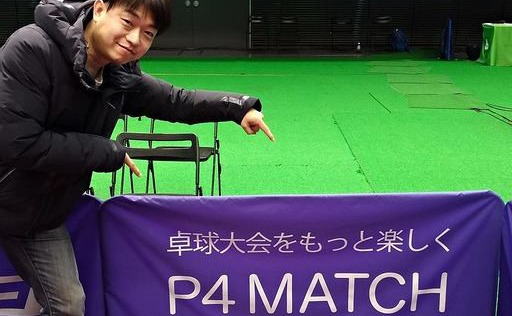 Even if you are not aware that there is an issue with task management, you will notice that issue by using Repsona.

Even if you are not aware that there is an issue with task management, you will notice that issue by using Repsona.

We interviewed Mr. Kiyofumi Tsukahara, CEO of P4MATCH Co., Ltd., about the background of the introduction of Repsona and the usability.

Mr. Tsukahara: We develop and operate P4MATCH. An online tournament system that is friendly to both players who want to participate in the table tennis tournament and tournament managers. Players who participate can easily see when and where their match will be played and who will be in charge of the referee of which match if they have a smartphone. We are aiming for a simple and speedy tournament by supporting fair and less error-prone tournaments.

P4MATCH, a service that connects players who want to participate in table tennis competitions with the competition manager

What made you decide to develop P4MATCH?

Mr. Tsukahara: I was a table tennis player and I was in table tennis games. I used to work for a company that made games until a few years ago, but I retired. I play more games than I do during work, so I decided to play table tennis for a while. When I played in many games, I felt a problem such as bad progress and bad combination, and I thought that this could be made into a tool unless I improved it by hand, so I made it.

Currently, it is used all over Japan. It is also spread by famous people. Table tennis has a large competition population, and there are many players overseas. Eventually I would like to expand the service overseas and participate in the game myself.

Mr. Tsukahara: It is used for P4MATCH development management. We will continue to increase what we want to make even if we continue development for 5 years. At first, the combination of the progress of the game. Individual doubles team competition. Support for things like unique rules of operation in various places, rankings and my page. There will be prizes when you open the competition, but it will be convenient for users if you coordinate the purchase of prizes.

As soon as I come up with something I want to make like this, I'm registering a task. After that, when you see the task and actually make it, you expand the idea, and when it expands, you register the task.

Every time we create a development task, we have the potential and excitement.

Mr. Tsukahara: I originally used Gmail Todo for development management, but since the number of items increased and management became complicated, I started using a famous Gantt chart web tool. Although I thought that it was heavy but it was better than Todo, I saw Trello be lighter on Twitter, but it was not a Gantt chart but at first glance I thought it was easy to use.

I also saw Repsona on Twitter this time, and I can see it on Kanban as well as Trello, and I thought that this is good because I can use the Gantt chart.

You can check it on the Kanban or Gantt chart while switching quickly.

Many of you, including myself, may not be aware that task management has problems or problems. Even if you use old things or heavy things, you will not be worried because the work will proceed. Only after changing the tools, I think that it was difficult. I got that feeling with Repsona.

Mr. Tsukahara: Made in Japan. It's made by the same Japanese, so I decided to try it. Now I am completely transferred and transferred.

The priority function is pretty good. By dividing in advance what to make next, it is very efficient to work without actually thinking about it.

The priority order can be adjusted while looking down in the Kanban format.

Mr. Tsukahara: When I am working, I mainly watch the Gantt chart, but since the screens change quickly, I watch them while switching quickly. I often see priorities. Even after seeing the whole with Kanban, I added comments even for functions that I do not create for the time being.

With a heavy tool, it may take about 3 seconds to see one task. With such a tool, I lose the feeling that I want to add more quickly, but Repsona is very nice because it works lightly.